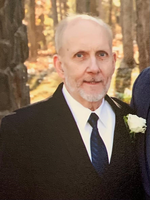 Bob was a very proud Navy Veteran who dedicated many years serving our country. He enlisted in 1968 during the Vietnam era. He received his bachelor's degree in Mechanical Engineering from Marquette University in 1976. He later attended Massachusetts Institute of Technology and received 5 different degrees earning a PhD. He was a dedicated Engineering Duty Officer reaching the rank of Lieutenant Commander, retiring after 23 years.  He worked for 20 years as a Systems Engineer for the Navy at NAEC Lakehurst. One of Bob's proudest accomplishments was being one of the three designers who helped research and create the Electromagnetic Aircraft Launch System. Bob was stationed in many places across the country including Jacksonville, Florida, Newport, Rhode Island, Philadelphia Shipyard, and Lakehurst, New Jersey. He was also a longtime member of the American Legion Post #68, he loved watching his son grow up and participate in sports and the arts. He helped coach the many MBBL teams, he was a Scout leader with the Cub Scouts, was a marshal for the Broomall String Band and was part of the Camden Catholic football parents club. He enjoyed going to and watching the Navy vs. Army football games and all the Philadelphia sports teams. He was a kind man who touched many lives, and he will not be forgotten for all he did.

Relatives & friends are invited to the Visitation & Funeral on Wednesday from 10 to 11 AM at Falco Caruso & Leonard Funeral Home, 6600 Browning RD in Pennsauken. A Memorial Service will be celebrated at 11 AM. Masks must be worn on premise. In lieu of flowers, donations can be made to Wounded Warrior Project, https://support.woundedwarriorproject.org